GenCon! Where has the summer gone?

A lot has happened since I last posted, 40K 6th edition dropped, US Games Day, and now GenCon! The latter has been the cause for neglecting the blog since I spent most of July in the BoD working on the Space Hulk game for GenCon. I’ll cover than in more detail in a future post. Today is all about the most wonderful time of the year that is GenCon.

This year the past and present collided as John and Ben were able to make it along with most of the crew from last year (Ty, Josh, Tommy, and Mike). We also added a new member to the party, Jeremy, the man behind Fat Kid Revolution.

Every year GenCon creeps more and more into actually starting Wednesday. This year the BoD transport vehicles arrived in Indy about 3:00 – 4:00pm. We stayed at the Marriott Courtyard which is part of the Marriott hotel complex and attached to the convention center through the JW Marriott.

John and I headed over to the convention hall since we were the first to arrive. By coincidence we ran into Alayna and Matt as they were unloading the stuff for her art booth. I tried to be helpful and got to see the chaos that is the vendor setup in the exhibit hall.

After a quick trip to check in at the hall, the gang headed over to High Velocity in the new JW Marriott. Sun King Brewing Co. was premiering their special GenCon beer “The Ale of Destiny”. Jeremy used his special powers of persuasion to get us some of the first glasses poured. It was a Belgian Dark Ale that was pretty good but the Oaken Barrel Indiana Amber that we were drinking previously was the favorite. 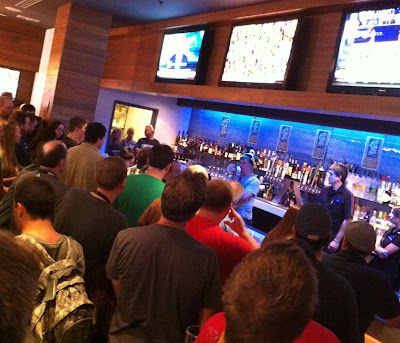 Wednesday night gaming consisted of a practice game of Resident Evil in preparation for the “win-a-mat” game some of us were playing the next day. Then with the whole gang Ty taught us Super Dungeon Explore which he had painstakingly assembled its 50+ minatures. 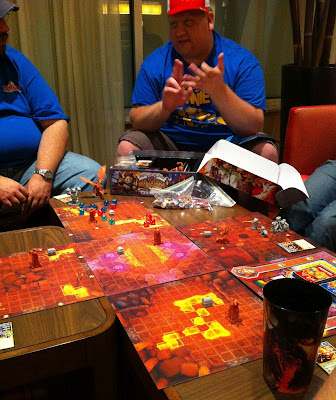 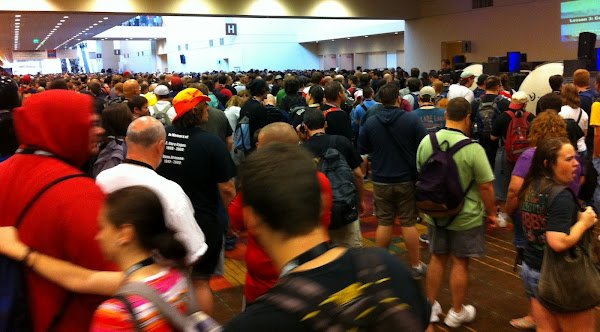 The opening day of GenCon started as it usually does with a huge mob waiting for the exhibit hall to open. Once it did open it was a little crazy for a Thursday with everyone rushing for the many products that were released at or limited to GenCon.

The first real event of GenCon was Josh, John and I playing in the Resident Evil win-a-mat event. I didn’t do well, John took second and Josh – WON A MAT!

At the end of us playing Res Evil, Ben arrived from the airport straight into a game of Formula D. I also played and it became the first game of Formula D where I actually finished the race! I should have done more than finish, as I was leading in lap two when I followed some bad advise from my crew chief, John (the 2-time defending RockCon Formula D champion), which left me spun out and eventually a 4th place finish.

The Ram was the place of choice for dinner and has become a yearly tradition for at least one meal. The evening event was Flames of War – Vietnam run by the great guys from Able Kompanie. Josh and Ty played in the afternoon game while Ben and I had been racing. This was unique in that there were only 2 player per side. Ben and I played the Vietnamese whose job it was to overrun the American drop site. Think of the scenario from the movie “We Were Soldiers“ complete with Hal Moore. David and the other guys from Able Kompanie ran a great game as always. 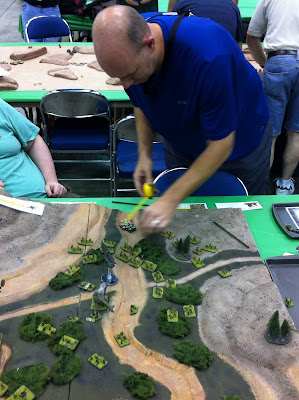 John played the Space Hulk: Death Angel – Card Game while we were reenacting the Vietnam war. The cool thing he discovered is that the newer printing of the game has symbols on the cards so it isn’t so difficult for us color blind people like John, Ty and myself.

We made our way back to the hotel to meet up with the rest of the group for late night gaming. Tonight it was the new game which Ty and Tommy had both bought a copy of : ZOMBICIDE! We played the tutorial and the first scenario and had a blast. Zombicide is my favorite new game of GenCon. It has great minis, top notch production, is fast and crazy fun! 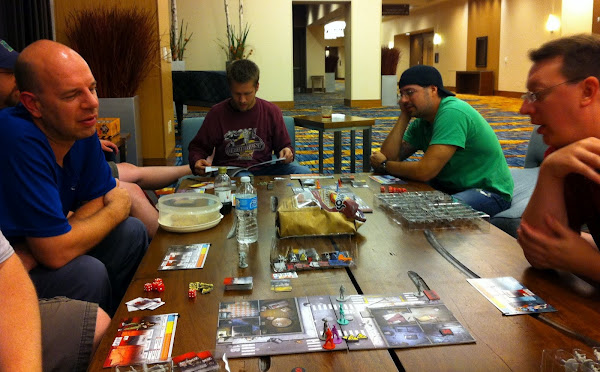 Friday – Day 2
The day started with the 40K RPG seminar from the guys at FFG. Also in the audience were Ross Watson and some of the other 40K freelance writers. As has been the norm lots of new books coming out for all four 40K RPG lines and the new core game Only War which focuses on the Imperial Guard.

At noon it was time to dust off our twenty-sided dice and try the demo of D&D Next. This was a 90 minute session that ended up being mostly an exercise in character creation and a short single scene combat session. It was fun enough and looks like D&D Next will still be good old Dungeons and Dragons.  You also got some cool Drow dice for playing.

In the afternoon John tried his hand at another Res Evil win-a-mat with similar results – 2nd place. The other guys were off puzzle solving and battling in True Dungeon. I let one of them describe how that went.  Ben and I spent some time wandering the exhibit hall and demo’ed the new Star Wars X-Wing game from FFG on a really cool Death Star table. 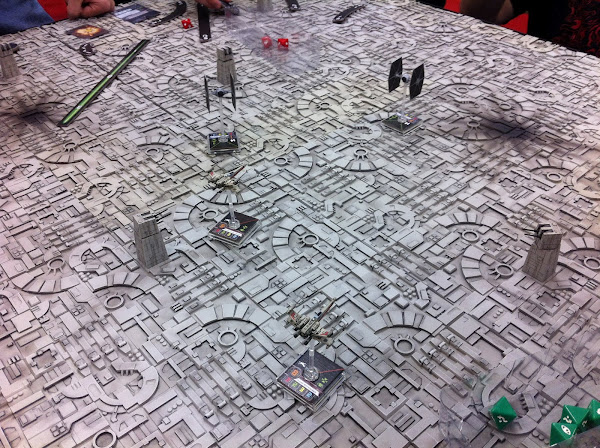 We popped into the auction and caught the end of the session for the Games Workshop items. I passed on the 3rd edition Space Hulk games at $180 but did pick up a 25 year old copy of Chaos Marauders for $12.

On Friday evening  Ty, Tommy and Jeremy did some role-playing in a game of Outbreak:Undead.  Zombies, someone falling/jumping off a roof, what could go wrong.  Sounded like they had a pretty good game.

John, Ben and I headed back to the hotel to camp out an area in the lobby to game for the rest of the night and broke out Chaos Marauders to see how it played after all this time.   The answer is it was alright but had some rough spots that I’ll have to check the FFG reprint version out to see if  they smoothed out.

Once every one got back together, late night gaming was a huge X-wing game with at least 15 ships from the many core and expansion sets that Ty, Tommy, Josh and Jeremy had bought during the day at the convention hall.  These large size battles is where the game seems to shine and be really fun.  X-wing was my 2nd favorite new game of GenCon but I’ll probably wait until the Millennium Falcon comes out before buying. 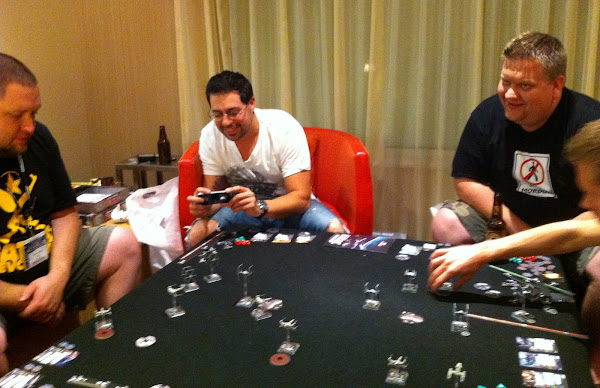 Saturday morning was the traditional run through the auction store to see what was left at their lowest Saturday prices.  I picked up a couple of GW terrain pieces.  Late morning five of us tried a demo of the Dungeon Command game.  This is a combination of D&D miniatures with Magic-type cards and mechanics for combat.  I’d have to play it  more before deciding if it is something I would play but the fact that it does come with cool pre-painted minis might get me to at least buy a copy.

For lunch John, Ben and I tried something new to GenCon this year, the Food Trucks!  Thursday through Saturday of the convention 20 different food truck were lined up across the street from the convention center.  They served lunch and dinner in two shifts of 10 trucks each.   Lots of choices and variety of good food.  John and I tried some grilled pizza from Batman. 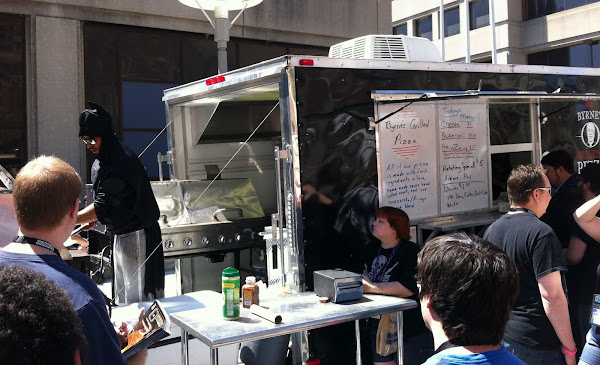 Then it was time for my Space Hulk event.  I’ll save for another post all the details on what went into this years event but this years event went off really well.   I had probably my best group of players ever, most of them had played in my events in previous years.   The marines had a major victory mostly due to the two squads on the one side of the board coming through fairly un-harmed. 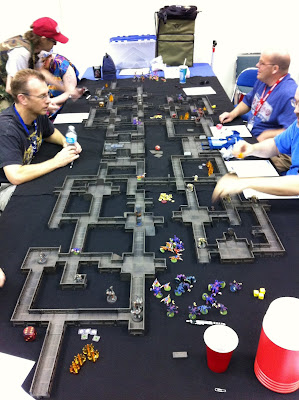 As we finished up Space Hulk it was time to say good-bye to Ben who hopped on a plane back home to San Antonio.

Saturday evening was time for what is becoming another year tradition – dinner at Scotty’s Brewhaus.  Good food, good beer and they even threw in some dice!  Josh did their 2lbs burger challenge only to find out they didn’t have the prize t-shirt in his size but the good folks at Scotty’s are rectifying the situation. 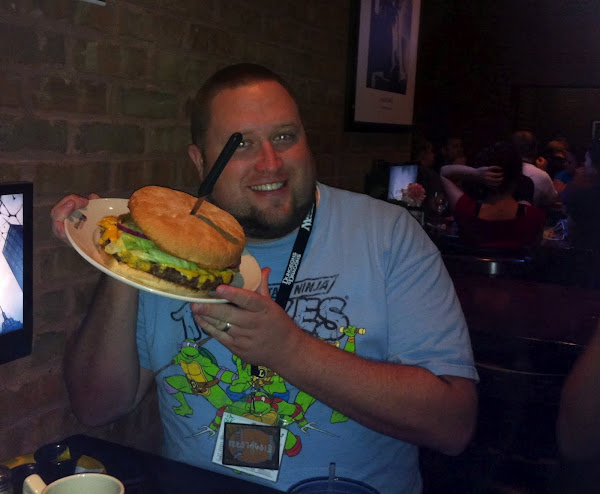 The late night game was Fortune and Glory.  Think of Indiana Jones and other pulp movies.  The players travel around the world to claim, or steal, items and artifacts for fortune and glory.  This was a fun game for our large group of 7 players but we were learning as we went and I’ll need to play it again to make we were playing correctly before I form an opinion.  The other highlight was the chocolate chip cookies which Mike brought.  Excellent desert enjoyed by everyone but Josh, who was still recovering from his 2lb burger. 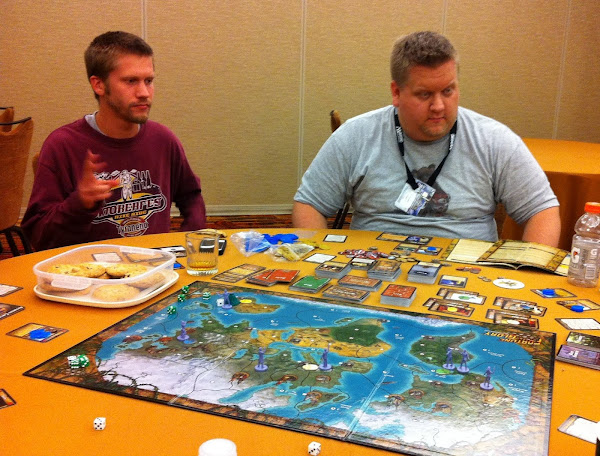 Bittersweet as always, the last day of GenCon had one goal: a complete detailed survey of the exhibit hall.  It took John and I about 3 hours to cover the entire exhibit hall space.   I, or I should say my wallet, came through fairly unscathed.  My list of purchases included:  Hey that’s my fish (too cheap to pass up) , dice (can never have enough), a T-shirt, a Summoner Wars deck, a couple of Armorcast minis, an event mini at ForgeWorld and Fiasco.

I’m sure I’ve missed, or mis-remembered, many things so hopefully the others of the BoD gang can chime in with their own recap posts or in the comments.

Here is the album with all my pictures from GenCon 2012.