RockCon and the Gentlemen’s Grand Tournament

John and I made our 5th(?) annual trip down to Rockford, Ill last weekend to attend RockCon 2011!  This was the second year that the two day “Gentlemen’s Grand 40K Tournament” was held there and I participated. The tournament was five games over the two days.  Three on Saturday and two Sunday morning.  The scenarios were all three objective based with primary worth 4 points, secondary 3 points and tertiary 2 points. 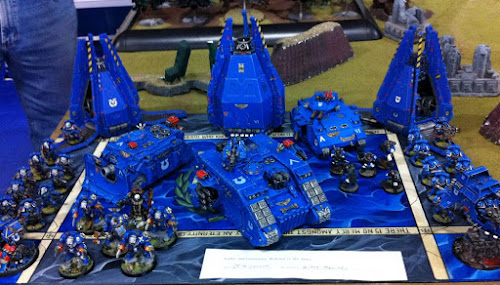 Really fun game.  Noah was great and the game came down to ending on turn 5 and the secondary object, annihilation, which I got 8-7.  Had the game gone turn 6 I probably would have been on the other side of that.  Noah finished with a 3-2 record and ended up winning the “Man for all Seasons” award which goes to the best overall score (record, appearance, and sportsmanship). 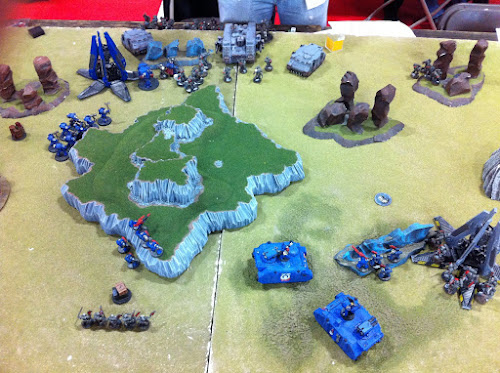 Early in the game against the Wolves

Steve ran an IG “leafblower” type list with 3 Vendettas.  Great guy to play against and a fun game even though I was pretty much tabled by the end.  Steve ended up second in the win/loss/points scoring for the tournament.

Chad was a really nice guy and a fun opponent.  His army though was rock hard.  I don’t think I would have stood up to 40 TH/SS terminators but a bad first turn of rolling saves for my terminators (4 – 1s!) pretty much sealed it. 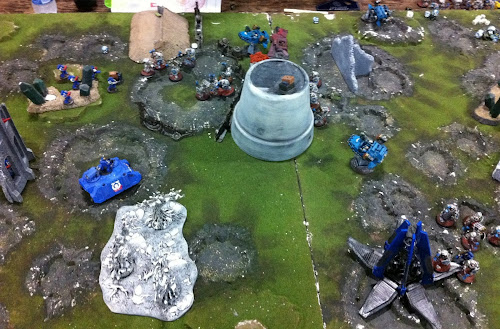 Toward the end of the game, Deathwing moping up...

On Saturday night John and I played Formula D.  This was my second time playing, my first was at Origins this year.  This is a fun convention game when you can get 8+ people to play.  I thought I was doing well but my string of 1’s haunted me as I rolled a 1 on a twenty sided 3 times in the first lap to crash with catastrophic body damage and end my night early.  John had much better luck.  I left with him in the lead and he continued to dominate and win the race!

My first game on Sunday morning was against a Khorne counts as Blood Angels army.  I really like how this army looked and the BA rules fit a Khorne army well.  I’ll credit all my battles against Ty’s Blood Angels with why I was able to pull off a very close win.
Game 5 – John P – Space Marines

Last match was against John and his dreadnought heavy space marine army.  John won the tournament last year so I knew I was in for a tough game even if he didn’t have as dominate an army this year.   Like all my opponents John was a great guy and we had a fun match even though my guys got shot off the table.

I finished 2-3 on the weekend which made me happy since I doubled my wins from last year.  When the awards were handed out I was humbled and  very surprised to win the “Perfect Gentleman” or Best Sportsman award.  I guess that means I wasn’t a dick and my opponents had as much fun playing against me as I did against them. 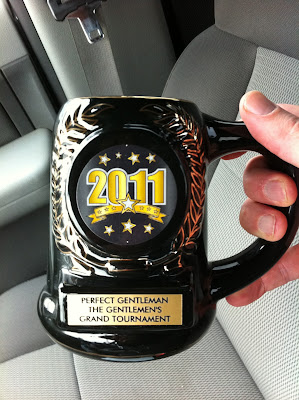 Besides the cool mug trophy, the prize also came with vendor credit which I used to get a very discounted copy of Dreadfleet. A nice ending to a really fun weekend.

I bought myself Dreadfleet as a prize

Posted on 11/10/2011, in Conventions, Tournaments. Bookmark the permalink. Leave a comment.