The BoD goes to Origins

GenCon is almost here so its about time I got the Origins post up.  Here are some photos and the day by day of my trip to Origins in Columbus, OH.  It had been almost 10 years since my last visit to Origins.  John, Ben and I made it our convention road trip from 1996 to 2002. Once Gen Con moved to Indianapolis then that became our yearly road trip.

This time my traveling companions were Ty, and “Friends of the BoD” Matt and Alayna. 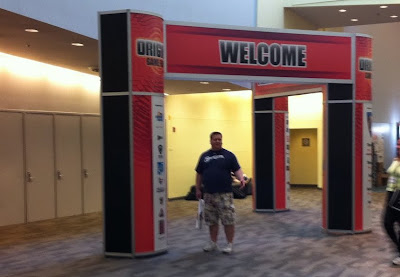 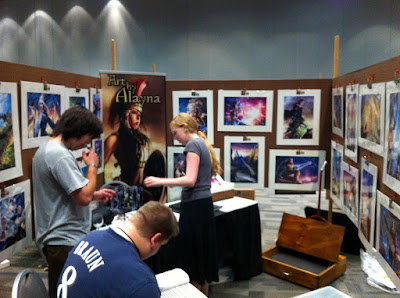 Alayna setting up her booth in the Art Show room

After Alayna got all of her wonderful artwork set up in her booth we headed out to dinner at the Elevator Brewery and Draught Haus which was around the corner from our hotel. Good beer and food, the highlight being the Corn Brat appetizers.

I was up bright and early for a Dark Heresy  game.   Run by Amorphous Blob, we had a pair of GMs for the game.   Our inquisitorial band started out investigating the disappearance of the crazy governor’s son and ended up discovering an underground invasion by the Tau.   Good game, the only problem was some kid who was “That Guy” in the group.  Had the social skills of some who only interacts with other human beings in WoW.

I then spent time wandering the exhibit hall with Ty, picked up the Wrath of Ashardalon game and played a demo of Resident Evil deck building game. I really like the deck building mechanic and love the Resident Evil theme so this was my next purchase and the game has gotten the most play during and since Origins.

We got a recommendation for dinner to try a little place across the street called Knead.  Amazing, amazing, Vegetable Pierogies, Homemade Pierogies and Brats, an Aviation drink and delicious deserts.

Played a Wings at War – Guadalcanal game.  Our mission was to shoot down the Japanese bombers before they could get to the island. 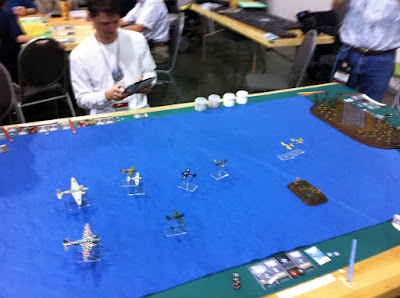 For lunch I went over to the North Market which is a block away from the convention center.  A lot like the Milwaukee Public Market with a bunch of different food vendors but better.   Had some great pizza by the slice and had lunch here Saturday and Sunday too. 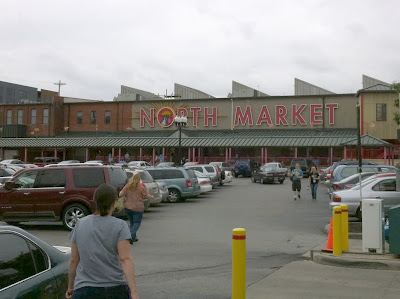 North Market - the place for lunch

In the afternoon I entered a Resident Evil tournament.  Not really a tournament, you just played the game against 3 others and the winner got a play mat.  I got close but took second.   The other benefit was I learned the real rules since we weren’t really playing correctly in the demo or the night before.

Friday night, Ty and I played in a Deathwatch RPG.  We had been looking forward to this since last GenCon and it didn’t disappoint.  Space Marines, Chaos and lots of shooting.

I got into a giant Formula D game.  I came a little late so I didn’t really know the rules and proceeded to use up my car by the second turn but recovered and was in the top 5 before I had to leave. 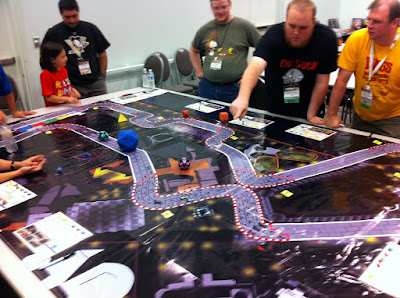 That afternoon Ty and I played a great Flames of War game put on by Golf Company.  It was a recreation of a battle during Operation Shingle.  I had the German Tiger IIIs and halftracks on the right side of the board and Ty had the US paratroopers on that side so we end up playing most against each other most of the afternoon.  The Germans made good initial progress but couldn’t get the US off the objectives in the end. 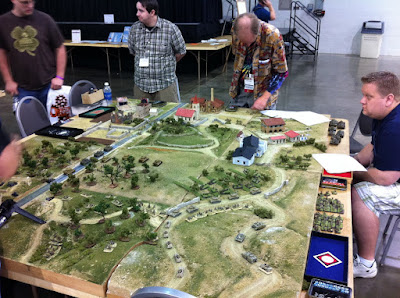 Flames of War - Before the Tigers Broke Free 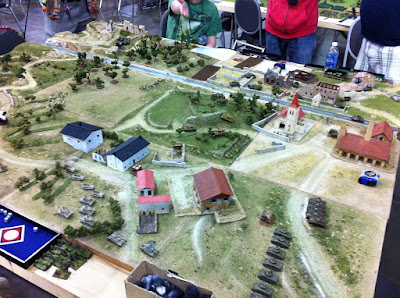 End of the game - Americans hold on

We finished up Flames of War and when to visit Alayna and Matt in the art show room.  We had a hour before the Art Show closed so I had the idea of  “Let’s go to Barley’s for one” while we wait for Matt and Alayna.   Needless to say one turned into three and then we found Kentucky Bourbon Barrel Ale and I lost count.  Had some dinner there and the night was still young so for some reason we thought we needed to take two growlers of Scottish Ale to go.

Back at the hotel we worked on the Scottish Ale and played more Resident Evil.  Alayna kicked our ass.

Took most of the morning and afternoon to recover from my hangover. Did a final tour of the hall, Ty taught me Zombie Munchkin and then we loaded up and headed for home.